Habs back to the top in the Schools Cup

With the lack of certainty about face-to-face events when it was arranged, this year’s Schools Cup and Youth Challenge took place online. After the advent of the inter-schools online league, this has become quite normal for many of the students and 22 teams participated, amongst the highest numbers in recent years.

In the qualifiers, Loughborough A dominated proceedings, achieving 77 VPs out of a maximum of 80. In their wake, Habs. A and Eton, last year’s finalists, also qualified for the semi-final, where they were joined by a surprise as Westminster C had an excellent session.

Habs. beat Westminster comfortably as each Habs. pair bid and made a slam not bid at the other table. Loughborough held off the challenge from Eton, beating two part-scores by a single trick each being enough to take them through.

The final was a re-match of a meeting in the qualifier, which Loughborough won by 28 IMPs over 5 boards. The final seemed to be going the same way when they took 5 IMPs on the first board. However, Habs., represented by James Cater, Rufus Barnett, Marco Vann and Zack Saurymper, made three game swings in the next four boards to take an unassailable lead.

The most interesting board was the last one. 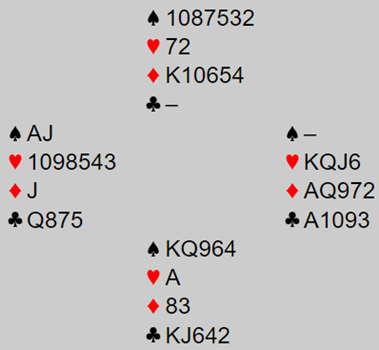 In the third-place play-off both Wests decided to open a weak 2♥, which East raised to game. South had to make a call about whether this was pre-emptive or a genuine bid for game. One South came in 4♠ and was doubled there. 4♥ is an easy make and 4♠X made on a heart lead when defence tried to cash a heart winner.

In the final, both Wests passed and East opened 1♦, overcalled 1♠ by South. One West decided it was worth a 2♥ bid, while the other showed his spade stop with 1NT. Over 1NT, the Habs. North judged his distribution worth a bid of 4♠, which East doubled. At the other table, North bid only 2♠, allowing East an easy raise to 4♥.

Against 4♠X, the Loughborough West made the lead of the ♦J. East found the play of overtaking with the ♦Q and giving a ruff, hoping to win a heart trick and partner’s trump stop to beat the contract. Unfortunately, with no heart trick coming, the contract made. The defence to beat it is to cash the ♦A, then give the ruff. Whatever declarer does, West now makes two trump tricks via a trump promotion. The double-game swing confirmed the win for Habs.

The interesting question is whether 5♥ would make if East bids over North’s 4♠. On the spade lead, declarer discards a club and ruffs a spade (high) to eliminate them before playing a high trump. South wins his bare ♥A and is endplayed. A spade gives a ruff-and-discard, allowing a second club to go from dummy guaranteeing the contract however the clubs lie. A club trivially avoids the second club loser, so a diamond return is best. However, the last trump can be draw in hand and a club to the ♣10 either makes the contract or endplays South again. Declarer does not have to guess clubs at any point.

The remaining teams continued the Swiss event from the qualifier. The leading school team wins the Schools Plate. This came down to the last board, but the late run from Westminster B was not enough to catch the High School of Glasgow, represented by Michael Kennedy, Kevin Ren, Alexander Duncan and Harry Stuart.

The leading team where players are not all from the same school wins the Harry Scully Trophy. The team of Lucy Norman, Charlotte Bedford, Tom Furness and Thomas Bradkin was 23 VPs clear at the top of the Swiss and won that in style.

Find out more about Bridge for All, the national learning programme developed and promoted through English Bridge Education and Development (EBED).
Read More